Navigate forward to interact with the calendar and select a date. Press the question mark key to get the keyboard shortcuts for changing dates.

Do you dream of being able to study on postcard-like beaches after your English lessons? To enjoy the sunshine almost all year round?

Then you should definitely go on a language trip to Malta! The thousand and one cultural treasures of its thousand-year-old history promise you atypical architecture and fascinating places in the heart of the pearl of the Mediterranean...

Start your language studies in Malta

The island state of Malta is located south of the Italian region of Sicily and north of the African coast.

The Republic of Malta is composed of several islands, three of which are inhabited: Malta, Gozo, Comino and has a population of almost 500,000 inhabitants, both natives and expatriates.

The strategic position of the country, which lies between the western and eastern Mediterranean seas, has been the object of the enthusiasm and covetousness of several peoples, empires and countries for thousands of years.

Over the years, it was thus colonized by several peoples: Sicilians, Phoenicians, Greeks, Tunisians, Romans, Vandals, Ostrogoths, the Byzantine Empire, Aghlabids, Normans, Ottomans, the Order of St. John of Jerusalem, then by the British for 164 years...

It finally obtained its own independence in 1964 and its constitution as a republic in 1974!

It then joined the European Union in 2004.

Although Malta has suffered a tumultuous and painful past, it has acquired a unique ethnic cultural enrichment and an architectural richness influenced by the passage of the various colonising nations.

You will see that the famous British red telephone booths and letter boxes have become part of the Maltese landscape.

Left-hand drive, left-hand steering and bilingualism in English and Maltese are also part of the British heritage left by the latter.

The heterogeneous architecture boasts monuments and buildings mixing several styles: medieval, baroque, the architectural heritage of the Knights of St. John of Jerusalem?

In addition to its magnificent buildings, the island of Malta boasts a sublime postcard landscape, thanks in particular to its paradisiacal beaches and colourful Mediterranean flora. 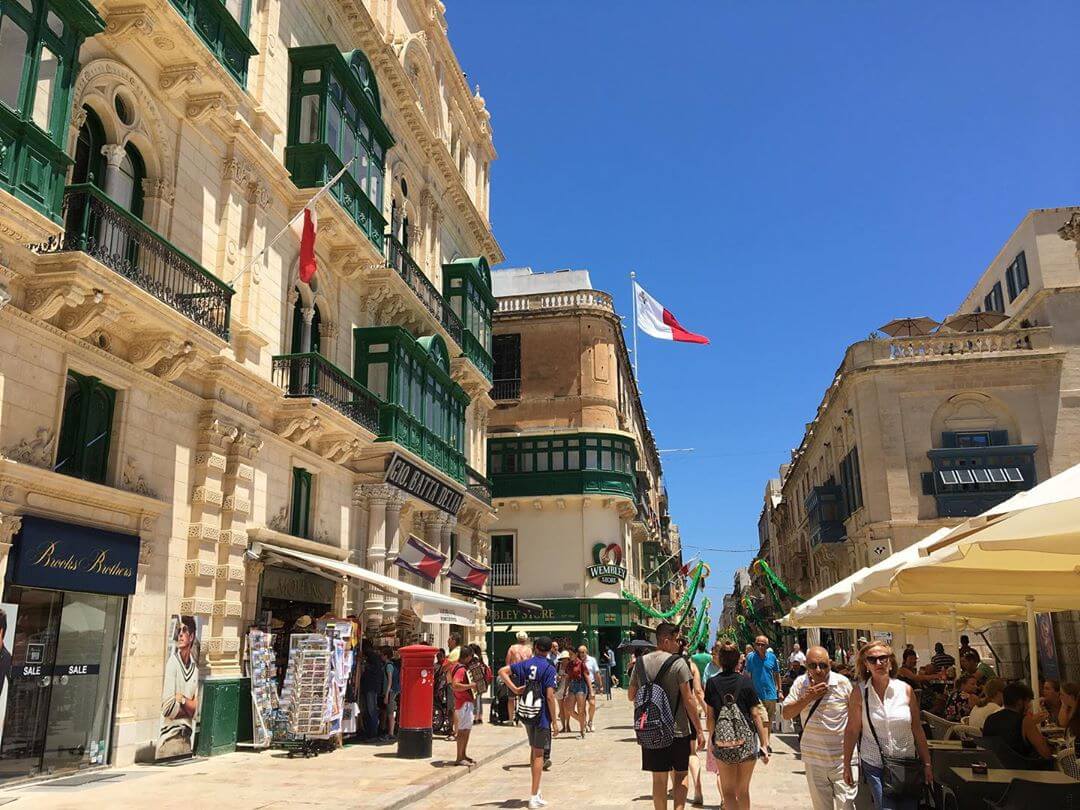 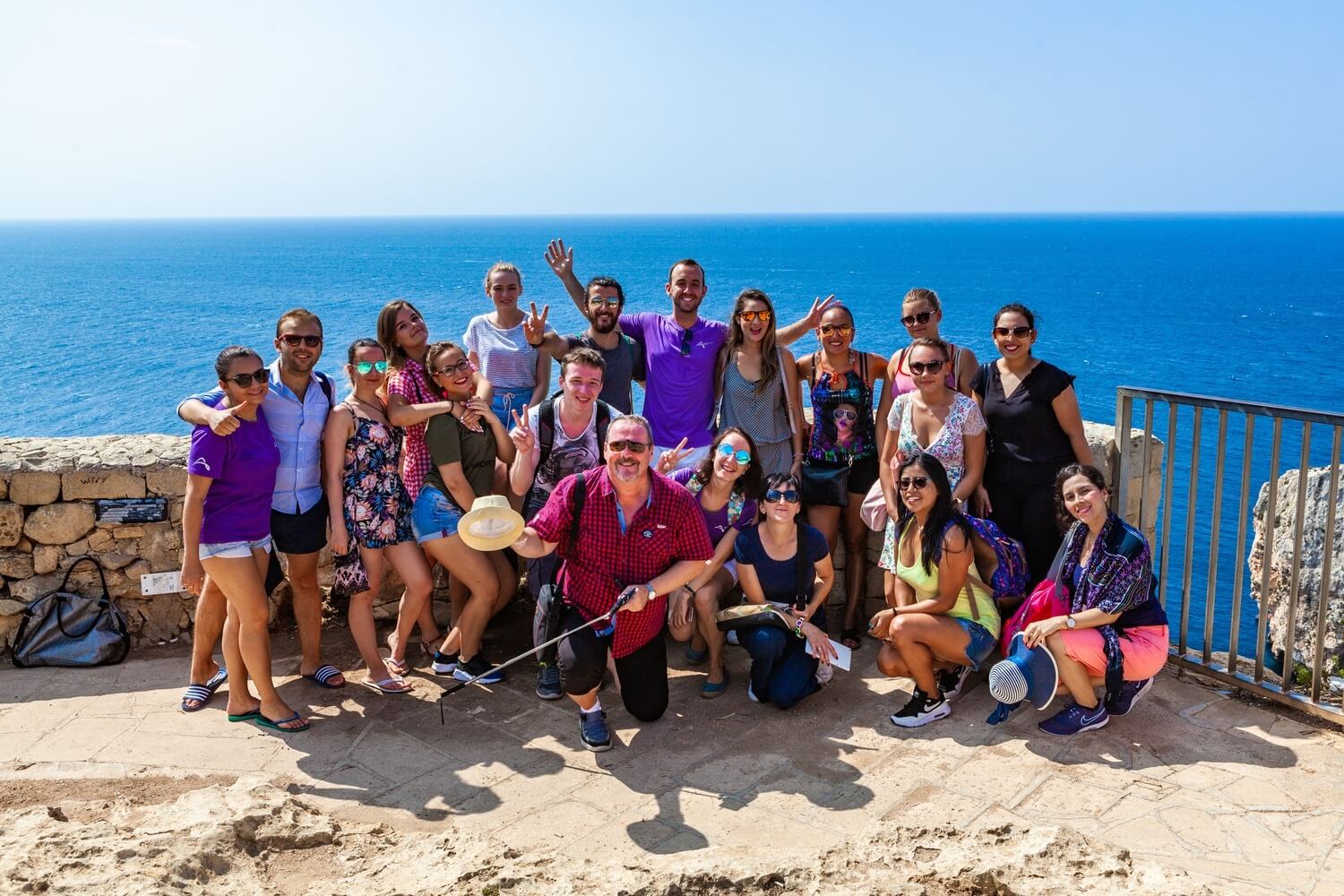 Why learn English in Malta?

The wonderful scenery and beaches of this fabulous island are not the only things that make Malta a great destination for a language trip.

How long will I have to go on a language course in Malta?

We advise you to spend at least two weeks in Malta to acquire or develop some additional English language skills.

However, if you plan to develop your English intensively, you should spend several months in Malta.

The icing on the cake is that the longer you stay, the cheaper the weekly price will be!

Keep in mind that a one-week break after 6 weeks of classes is highly recommended to avoid shortness of breath or even saturation. You'll come back in great shape and ultra motivated to continue your language courses.

Ideal time to go to the pearl of the Mediterranean Sea

Malta is the sunniest country in Europe! Its Mediterranean climate, with mild but fairly wet winters and a hot summer, offers annual temperatures between 18°c and 30°c!

The sea temperature is between 16 °C in winter and 30 °C in summer.

If you would like to benefit from courses in smaller groups of students, plan your language study stay in Malta during the low season.

If you choose to leave in the high season to take advantage of the better climate, the price will be higher and the number of students per class will be higher.

The pearl of the Mediterranean promises you fabulous discoveries, escapades and excursions.

Among them, you will be able to visit :

Which cities to choose for your language trips?

If you would like to enjoy a lively and dynamic environment, we recommend that you choose Saint Julians as your base for your language studies.

There are lots of events in bars in the evenings where you can practice your English with other foreigners over a drink.

If you prefer to be in a nice and quiet place, we recommend a language stay in Sliema which is more residential. Sliema is a small seaside town in Malta that was once a small fishing village, which in Maltese means "peace and security". Today it is a very lively and dynamic town of 14,000 inhabitants.

Sliema is an ideal destination to learn English where you can meet both Maltese people and many expatriates from all over the world. The city of Sliema is home to a dynamic commercial life with its many hotels, shops and restaurants.

For a destination closer to nature and the seaside, a language stay in Pembroke is ideal.

For a restful place, close to all amenities and beautiful natural sites, a language course in St. Paul's Bay is a must. And to meet expats if you plan to stay in Malta after your studies, a language school in Gzira, which is located near the seafront, is a must! You can also take the shuttle boat to Valletta.

There are several types of accommodation on offer:

Practical information before the big departure

Benefit from practical information to know everything about the island in order to organise your language study stay in Malta.

Money and cost of living

The currency used in Malta is the Euro.The cost of living is about 18% cheaper than in France, and food in shops is on average 25% cheaper.

Malta is quite simply the safest country in Europe! Your children and/or yourself can therefore enjoy your language study stay in Malta with complete peace of mind.

Maltese gastronomy, as well as its architecture, is very perse! Inspired by Mediterranean cuisine, Maltese cuisine is deliciously fragrant and spicy, with typical Maltese dishes such as torta tal lampuki, aljotta, bigilla and pastizzi, brungiel mimli and figolli.

The two official foreign languages are Maltese and English. Maltese is more regularly used, but the population is still bilingual.

You want to discover other destinations? I want to go cage ping with white sharks... I'm going on a language trip to South Africa!

I want to admire the Great Barrier Reef... I'm going on a language trip to Australia!

I want to enter the Grand Canyon National Park... I'm going on a language trip to the United States!

I want to go to a much bigger island... I'm going on a language trip to England!

I dream of discovering Celtic culture... I'm going on a language trip to Ireland!

I want to visit imperial palaces... I'm off on a language trip to Japan!

I want to see as far as the eye can see... I'm going on a language trip to New Zealand!

I want to go to Northern Europe... I'm going on a language trip to Scotland!

I want to go to the other side of the world... I'm going on a language stay in Australia!